Kapiti Run for Youth (KR4Y), along with other volunteer groups and individuals has been recognised for community dedication in the Kāpiti Coast Civic and Community Awards on 12 July.

Mayor K Gurunathan said on the night, “that it’s a chance to sing the praises of the often-unsung heroes of our coast.  Non-profit organisations contribute about $6 billion to our social economy a year, with the labour of volunteers adding another $3.5 billion.  Our generous community contributes to the wider picture through their tireless and generous volunteerism.”

The Wellington Airport Regional Community Awards focus on volunteer groups in the categories of Heritage & Environment, Health & Wellbeing, Arts & Culture, Sports & Leisure, Education & Child/Youth Development, and Rising Star.  The Kapiti winners of each Category will now go to Wellington in November to compete in the Regional Awards where all five local councils will come together to recognise the work carried out by community groups in the wider Wellington region.

Richard Calkin, Founding Director of Web Genius says, “he was honoured for KR4Y to receive this Award.  I was even more surprised when I opened the envelope with the Certificate as it was a cheque for $1,000 from the Wellington Community Trust.  This money means we can start planning for 2019 with confidence which is really great.”

Campaign Manager, Helene Judge was truly delighted that KR4Y was a winner on the night.  “Much time, planning and activity is applied to running this event so it’s super for everyone involved to be acknowledged in this way.  Kapiti Run for Youth operates with a social entrepreneurial conscious and it is our intention to keep doing that for the benefit of young people in the Kapiti community,” says Helene.

The KR4Y Fundraising Model focuses on returning as much money as we can back to the Kapiti community operating in the youth space.  All funds raised are split 70% to the official Fundraising Partner chosen by the participant at the time of registration and 30% is retained towards running and promotion of the event.  We also operate a Business Sponsorship model whereby local businesses can sponsor Gold $500, Silver $250 or Bronze $125.  This sponsorship works for many businesses who want to support the underlying work of this event and youth of Kapiti.

KR4Y was created by Web Genius.  KR4Y was seen as their way as a local business to ‘give back’ to their community.  There are a number of key people within Web Genius who are active members of the group who help to make KR4Y happen.

In addition to this group there are a number of local business people who give their time, services and products to make KR4Y a noticeable and growing event.  The businesses involved who are profiled as Sponsors include Beach FM, City Fitness, Kapiti Business Projects, Kapiti Candy Co, Kapiti Law, Kapiti News, LowTax Accounting Services, Peter Jackson Plumbing, R-Line, Shoe Clinic, SignCraft, 16Nine Photography and Web Genius.

On the day of the event, volunteer numbers swell as we need additional help in the Registration Gazebo and we need Marshalls on the Beach at the Start and Turnaround point.  In 2017 we had some of the team from Kapiti Youth Support assist along with a group of young people from the Kapiti 49 Squadron Airforce Training Cadets who were excellent assistants on the day. 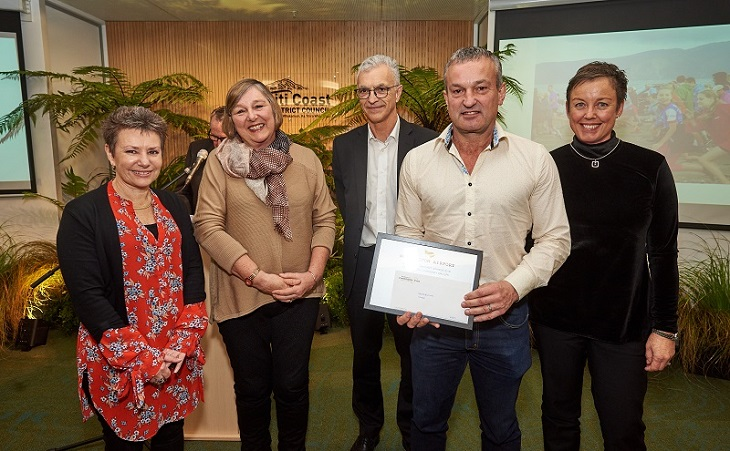 + Text Size -
Do NOT follow this link or you will be banned from the site! Original generation time 1.6893 seconds.